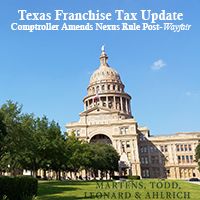 For decades, states were prohibited from imposing sales taxes on out-of-state entities that lacked a physical presence inside the state. Quill Corp. v. North Dakota, 504 U.S. 298 (1992). This physical presence requirement gave out-of-state e-retailers a competitive advantage—the ability to makes sales without charging tax—over their in-state counterparts. Then, in 2018, the U.S. Supreme Court struck down the “physical presence” requirement. Wayfair slip op. at 2. The Supreme Court noted that each year, the physical presence rule “becomes further removed from economic reality” and called it an “incorrect interpretation” of the Constitution even at the time it was formulated. Id. at 2. The Court decided that a company can be subject to this tax collection requirement as long as it has a sufficient “economic presence.” Id.

Months ago, the Texas Comptroller revised his sales tax nexus rule to implement a $500,000 economic presence threshold. More recently, he proposed amendments to his franchise tax nexus rule to implement a similar $500,000 economic presence threshold. Under the proposed rule, if an entity receives $500,000 or more in “gross receipts from business done in Texas,” in a 12-month period the entity must begin filing franchise tax reports and paying the tax. The proposed rule is set to apply to franchise tax reports due in 2020, based on activity during accounting periods ending in 2019.

Repurposing the apportionment rules to determine whether a taxpayer crosses the $500,000 economic presence threshold may violate the U.S. Constitution, particularly for income that gets sourced to a state without the recipient taking any action to establish a physical or economic presence in that state.

Consider the Comptroller’s Rule for apportionment of interest and dividend income (from an unrelated party that isn’t a national bank). Rule 3.591(e)(8)(C). Under this Rule, dividends and interest are apportioned to the legal domicile of the payor. This could trigger a franchise tax liability for an entity with no connection to Texas except that it happens to hold an ownership interest in a corporation that chose Texas for its state of incorporation.

Imagine a corporation formed and exclusively operating in New York (“NYCo”). During 2019, NYCo receives $550K in interest income from an unrelated entity (“NJCo”). NJCo is a corporation operating exclusively in New Jersey but formed under the laws of Texas. Prior to the Comptroller’s adoption of economic nexus rules, NYCo would not have any Texas franchise tax payment or reporting obligations. However, under the proposed rules, NYCo now has over $500,000 in “gross receipts from business done in Texas” simply because the “legal domicile of the payor” of its interest receipts was Texas.

This scenario may violate U.S. Supreme Court precedent established in North Carolina Dept. of Revenue v. Kimberley Rice Kaestner 1992 Family Trust. No. 18-457 (June 21, 2019). In Kaestner, the U.S. Supreme Court unanimously held that North Carolina could not tax an out-of-state trust solely because a beneficiary resided in North Carolina. Under the terms of that trust, the beneficiary could not demand distributions. And the trustee did not make any distributions to that beneficiary during the time period at issue. The Supreme Court relied upon a longstanding rule that requires a “minimum connection, between a state and the person, property or transaction it seeks to tax.” Slip op. at 5 (citing Quill Corp v. North Dakota, 504 U.S. 298 (1992)).

In our example, NYCo lacks a minimum connection with Texas. Indeed, it is arguable that the connection between NYCo and Texas is more tenuous than the resident-beneficiary link between the trust in Kaestner and North Carolina.

If NYCo had no other income, it might qualify for an exclusion in Tex. Tax Code § 171.002(d)(2) for entities with total revenue below an approximately $1.1M threshold. Nevertheless, Texas’ laws would require this entity to file a “No Tax Due Report.” If NYCo failed to file the report, it could lead to hard-hitting consequences, including forfeiture of corporate privileges, the imposition of personal liability for officers and directors, along with estimated tax assessments, penalties and interest.